Create an Account - Increase your productivity, customize your experience, and engage in information you care about.

The below are from The Historic Palatka Water Works, a pamphlet prepared by SouthArc, Inc. and compiled from information presented in The Palatka Water Works (8PU103): An Architectural and Archaeological Study (Wayne and Dickinson 1997) completed for the City of Palakta under a grant from the Florida Division of Historical Resource. A copy of the entire study is located in the Old Pump House of the Palatka Water Works at 1101 Whitewater Drive, Palatka, FL 32177.

The balance of the structures at the Water Works appears to date to the 1930s to post-World War II period of operations. Based on aerial photographs the initial sand filters and settling tanks (B and C in Figure 5) were constructed prior to 1943, while consruction plans for the second set of filters and tanks (Fand G) are dated 1955 (USDA 1943; Smith and Company 1955). Sam Willis (personal communication, 1997) said that phasing out of the springs began in the late 1950s and was completed by the late 1960s when the water all came from wellfields on the hill to the north and in the golf course south of White Water Branch; the reservoirs and springs were abandoned at that time.

The first structures to the west of the pump house were a set of four sand filters and two settling tanks constructed of cast-in-place reinforced concrete with bevelled edges (B and C in Figure 5). The excellent construction is typical of 1930s Depression-era workmanship. Sometime after the mid-1950s the settling tanks were roofed using steel rafters, wood cross beams and fiberglass roofing.

The sand filters consisted of a series of four tanks divided at the east end into a separate deeper well of sump. The larger portion of each tank contained two fiberglass channels. Water was pumped into the well in the east end, where it flowed into the channels. Any remaining debris settled into the well or sump at the east end of the filters, or in the bottom of the channels, while the water spilled over the top of the channels into the sand beds below. A series of valves on a platform at the east end of the structure controlled pumps in a room below the platform. These pumps were used to transfer the filtered water into the water mains and also to backwash the filters daily to clean them. The settling tanks consisted of two tanks west of the filters. The tank floors sloped to the center and east end whrewater was drained during maintenance. A concrete trough around the rim of the tanks allowed water to flow in the west end and out to th efilters on the east end.

The largest structure between the two filtration systems was the clear well (E in Figure 5), which also dated to the pre-1943 period (USDA 1943). The upper portion of this sturcture was stuccoed concrete block, while the rest of the structure appears to be cast-in-place concrete. The wood-and-aluminum roof sloped to the south and was supported by steel posts on red terracotta hollow tile footers. A clerestory along the north and south sides of the clear well was screened between the block walls and the roof. A pump and access to the well were located at the north end of the west wall. The clear well was used as a holding tank for treated water and for use in backwashing the filters.

The new pump house containing electric pumps was located at the west end of the older set of settling tanks (D in Figure 5) and actually sat over a portion of the clear well (S. Willis, personal communication, 1997). Steps led down from the road to a concrete terrace between the pump house and clear well, with a second set of pyramidal steps down to the reservoirs on the south. The pymp house was a single-story concrete block building built in 1963. Roof openings provided access for removal of the pumps; these were originally covered with steel trap doors (S. Willis, personal communication, 1997). Two small rooms in the sowthwest corner of hte structure were used for chemical treatment of the water. The building comtained three large and two smaller pumps, with a pad for another pump, a control valve and two openings providing access to the water-filled clear well area below the floor.

An aerator was located at street level north of the new pump house (I in Figure 5). This structure consisted of a poured concrete pad and frame with cantilevered platforms at the east and west sides. Originally it had a set of stacked wooden slats and grates protected by a plywood roof. Water was pumped up to the top and ran downthrough the slats to add oxygen adn release hydrogen sulfide gas (S. Willis, personal communication, 1997). A retaining wall with a decorative concrete block screen separated the aerator from the pump house below. A concrete well on the norh side of this wall apparently provided access to pipes.

An unroofed concrete block structure was located at the northeast corner of the clear well (J in Figure 5). This structure, which had a single entry on the norh side. contained electric transformers for the Water Works facility.

A small concrete blick building is located on the north side of the street opposite the clear well (K in Figure 5). The building has an end gable roof with composite shingles, and a double door on the east gable end. There are small windows on the north and south sides. This was apparently a general purpose building used for tools, storage and maintenance. 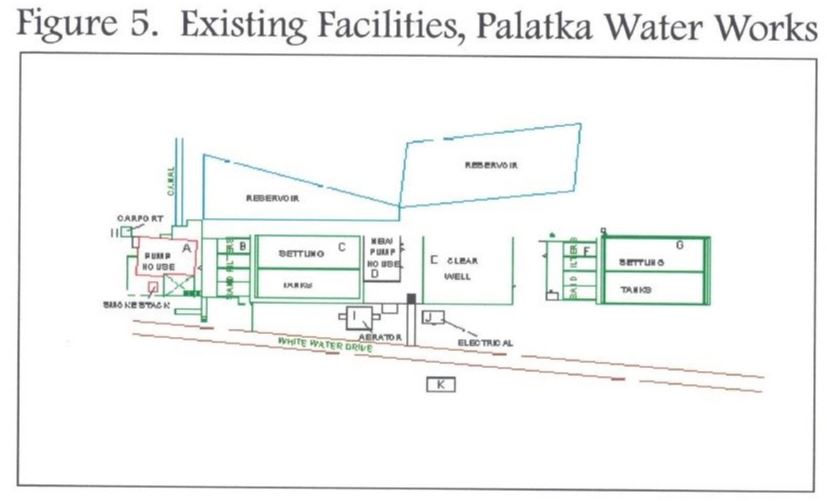